A walk on the westernmost and most mountainous of the six main peaks in the Mendip Hills, a summit topped by limestone exposures, overlooking the Somerset Levels and the Bristol Channel coastline. Downloadable map available here.

We work hard to make this website the best it can be. If you've found it useful, please consider buying us a coffee to show your support.

How to get there: Along Webbington Road, near Compton Bishop.

A walk on the westernmost of the six main summits of the Mendip Hills.

Map with thanks to Ordnance Survey.

1 The path heads northwest from the car park, passing a thin belt of trees and up to a junction on the crest of a ridge. From here the summit is a little over half a mile away, climbing with a steady though not too steep gradient.

2 From the peak, the onwards path slopes down a little to a five-way junction; three of the routes descend, and the other continues over the high ground, alongside a recently-restored section of dry stone wall, up to the minor, grassy highpoint of Compton Hill.

3 Follow the path around the head of a valley to Barton Hill, then up a little more to the summit of Wavering Down, the far side of which has views of Cheddar Reservoir and the hills around Cheddar Gorge.

4 Follow the route and descend the steeper slopes to the south, meeting another path that angles to the southwest, aiming for a patch of woodland. On the far side of the trees, the path crosses two fields and meets a country lane at the edge of Compton Bishop, from where the parking area is a short walk away. Take a look on either side of the path at two short caves - Sandy Cave on the east side, a relatively small opening near the top of the ridge, and Denny's Hole to the west, which a larger, deeper cavern with a slippery mud slope at its entrance. Two further walks to consider in the South West. 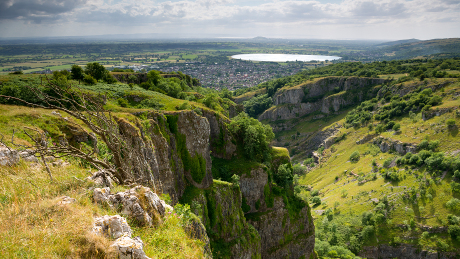 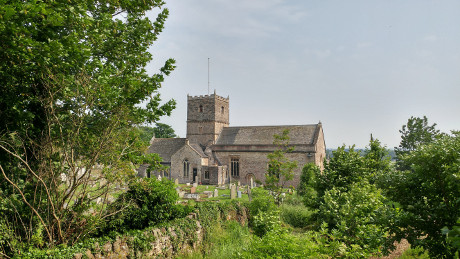 Say thanks with a coffee.